Robert “Buddy” Webster, who is in his early 50s, exercises regularly and looks and feels healthy. Unfortunately, his consistently healthy choices in his life couldn’t wipe away what was looming underneath the surface: a family history of heart disease. His father passed away at age 62. His younger brother passed in October 2019 due to hardening of the arteries.

Webster knew he had a higher risk of heart disease, but he wasn’t motivated to get checked out until a longtime friend with a background in cardiology encouraged him to do so. This friend was none other than John “Jack” Pirris, MD, chief of the division of cardiothoracic surgery at the UF College of Medicine – Jacksonville.

John “Jack” Pirris, MD, is a cardiac surgeon and chief of the division of cardiothoracic surgery.

Webster has known Pirris for more than 15 years. Their children grew up together, and they were both football and baseball coaches for their sons’ teams. After Webster’s younger brother passed away, Pirris encouraged him to get screened as soon as possible.

From screening to surgery

In early 2020, Webster scheduled an appointment at the UF Health Cardiovascular Center – Jacksonville. Cardiologist Martin Zenni, MD, conducted a series of screenings on Webster, testing his stress level, blood pressure and cholesterol. Although his blood pressure and cholesterol were high, his stress test result was normal. Still, Zenni and Pirris felt troubled about Webster and worried there might be something deeper that basic tests couldn’t uncover.

Both physicians recommended cardiac catheterization, completed two weeks later, during which a tube was placed into Webster’s artery to fully examine his heart, blood pressure, blood flow and oxygen.

The results weren’t pretty, as they showed extensive blockages in Webster’s coronary arteries (those nearest to his heart). Zenni and Pirris quickly confirmed that Webster was at risk of developing coronary artery disease and needed surgery to treat his blocked arteries.

Pirris said, “If Buddy had waited much longer, there would be a higher chance of a heart attack or worse.”

A rare procedure to a quick recovery

Blocked arteries can be treated by bypassing them with a healthy blood vessel, either an artery or vein, from elsewhere in the body. Recent data show that using arteries instead of veins leads to a higher survival rate.

Pirris followed that data, using both mammary arteries from the inside of Buddy’s chest wall in addition to his left arm, thus performing a complex type of bypass surgery called multi-arterial grafting.

In order to get to the arteries, Webster’s sternum had to be cut. After typical open-heart surgeries, the sternum is closed using wires to sew it back up. In Webster’s case, his sternum was closed with plates and screws.

UF Health Jacksonville is currently the only program in Northeast Florida routinely performing this type of surgery. Multi-arterial grafting is a challenging operation that involves more time and detail than standard bypass surgeries, but has a higher and faster recovery rate, along with a reduced risk of infection.

“The recovery was amazingly quick and easy,” said Webster. “I was out of the hospital after five days, back at work three weeks later and playing golf two weeks after that. All of the staff, nurses and physicians at UF Health were fantastic during my entire stay. I can’t thank them enough.”

Webster’s wife, Tina, and sons, Rob and Mathews, are glad to spend time together after Buddy’s successful surgery.

Webster feels very fortunate to have a friend like Pirris, who not only encouraged him to get screened, but also helped extend his life before anything could get worse. He strongly recommends that others with a similar family history be as proactive as possible when it comes to their health and get screened.

“I did not want to operate on my best friend,” said Pirris. “However, we are the only program in the region that routinely performs multi-arterial bypasses. Thus, I was confident Buddy would get the most successful operation possible here at UF Health Jacksonville, and I wanted the best for him in the long term.” 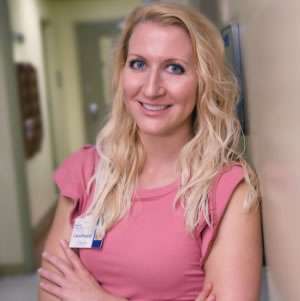 Bonnie Steiner is the social media coordinator in the Communications and Marketing department at UF Health Jacksonville. She is responsible for managing, creating and sharing content on the UF Health Jacksonville social media pages, along with the Health Matters blog. She is also a contributing writer for Open Lines and assists with various internal and external communications and marketing efforts as needed.

Time to toss the Tums 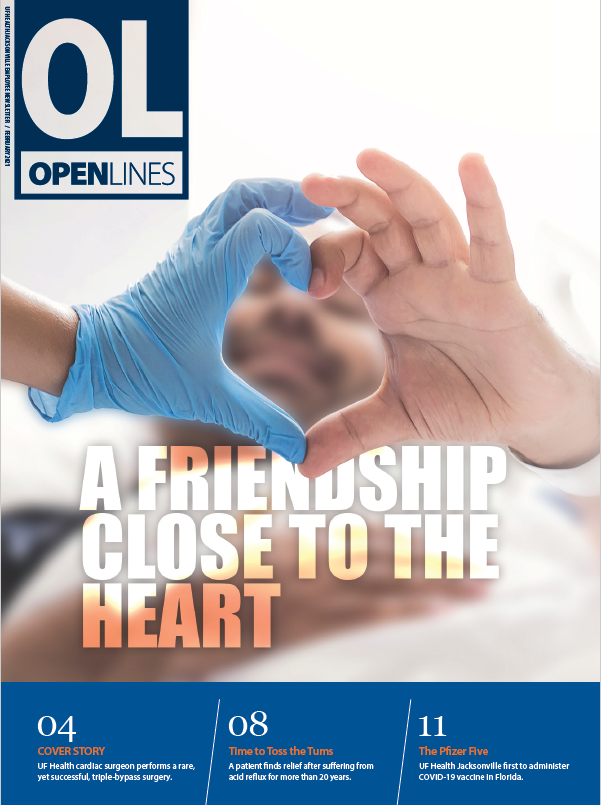