The week before Thanksgiving, residential remodeler Freeman Mann found himself repeatedly gasping for air, each day worse than the one before. Co-workers encouraged him to see a doctor, but he refused. That was until a friend stopped by Mann’s worksite to check on him, and shortness of breath nearly kept him from reaching her car.

“I was sitting on the front steps of the jobsite, and by the time I got to her car 25 feet away, I was hanging onto it,” Mann said, shaking his head. Desperation could be heard in his Southern accent as the memories replayed. “Man, I couldn’t get no wind.”

“When he was admitted, his heart was very weak and he had fluid in the lungs,” said Andres Pineda, MD, a UF Health interventional cardiologist. “He was very sick when we met him.”

Normal heart function is between 55% and 65%. Pineda said Mann’s tests reported only 10% function, which is in the danger zone.

“After a couple of days, they transferred me to the main hospital,” Mann said. “I told them, ‘Guess I’m not going home for Thanksgiving.’”

He was right. It took two weeks at UF Health Jacksonville to build enough strength to walk out. However, the journey was far from over.

“They didn’t forget about me,” Mann said as his hazel eyes lit up with appreciation. “I didn’t have insurance, but that didn’t matter. They checked up on me.”

Pineda prescribed Mann medications and ordered he rest at home in preparation for a heart procedure. In the interim, Mann obtained insurance, his heart function increased to a safe level for the procedure and a date was scheduled.

“We typically use this on patients who are 70, but Mr. Mann was born with bicuspid aortic valve, and when he got to us, he was so sick,” Pineda said. The congenital abnormality is common. However, in Mann’s case, he developed stenosis.

“Instead of having three leaflets in the heart valve, he was born with two,” Pineda explained. “Also, his heart valve was severely calcified and narrowed. Once you have that, there is significant pressure that the heart muscle needs to work against to get the blood out to the rest of the body.”

Had Mann known the signs to look for, he could have gotten help sooner.

“I was sleeping with six pillows stacked up,” he said. “I quit smoking 18 months ago, but it got harder to breathe.”

“That’s typical in patients with congestive heart failure,” Pineda said. “Severe fatigue, swelling of the legs, chest pain or pressure, fainting episodes and shortness of breath when they are walking or lying flat. All of those are signs and symptoms of heart disease.”

Freeman Mann, who’s lived in the same neighborhood his whole life, knows not to take his health for granted. “Twenty-two of us grew up here,” he said while standing at his front door and pointing down the street. “Only three of us are left.”

Fortunately for Mann, he made it in time. Any longer and permanent damage is always a risk. After a month at home, he returned to UF Health Jacksonville and was cleared for the procedure.

“I went under for surgery at 2 p.m., woke up at about 9:30 the next morning and the nurse told me, ‘You’ve got to get up and move around,’” Mann said as his eyes widened. He then popped his head forward.

“Can you believe it? The next day,” he said, throwing a hand in the air, “I was going home. I was tickled to death.”

Life is quite different now for him. The sturdy-built, hardworking man talks about not taking life for granted and says he’s ready to get back to work. His six-pillow stack is now a comfortable two, and he recently became a great-uncle.

“Mr. Mann is close to normal at 45% to 50% heart function,” a smiling Pineda said. “It is possible, if he complies with his medications and follow-up, he could completely heal. His prognosis is good. You can live a normal life with 50%.”

“A lot of people believe their symptoms are due to age, smoking or inactivity,” he said. “When something is not right, get checked.” Tracy Collins was born in Bismarck, North Dakota and raised in Great Falls, Montana. After four years in the U.S. Navy as an award-winning broadcast journalist, she graduated from the University of North Florida with a B.S. in Communications.

As media personality Tracy Dot Com, she is known for her entertainment insight in Jacksonville, Florida. She appears weekly on WJXT/TV-4 The Local Station and CW17, writes a column for The Florida Times-Union and BUZZ Magazine and was voted Best Righteous Crusader two years in a row by Folio Weekly readers for her work in the community.

She is currently working on her first full-length book and speaking around the country promoting alcohol awareness and education. 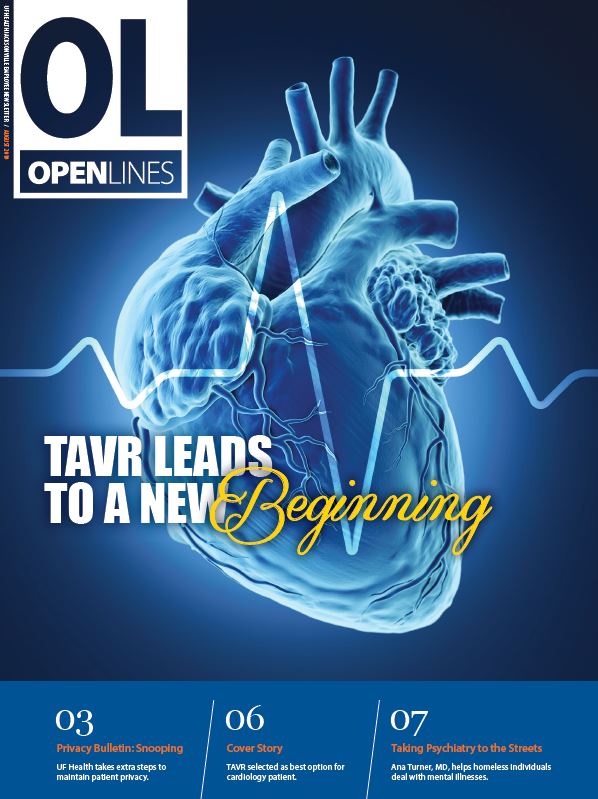