Karen Kaunitz found herself sitting with pen and pad, writing her own obituary on May 15. Convinced her recent medical struggle would not end well and unable to sleep most of the night, she scheduled an appointment with a UF Health cardiologist to discuss her options, hoping it was not too late to intervene.

The office visit with Daniel Soffer, MD, never happened. Instead, she was admitted to the emergency room, gasping for breath.

Three months earlier, Karen’s lifelong battle with lung disease hit a peak. Starting with asthma as a young adult, progressing to oxygen support in 2000, and eventually developing into pulmonary hypertension, the 67-year-old now spent most of her days in bed, finding it difficult to walk even a few feet. Quality of life diminished to occasional visits from friends and family, and time at home with her husband, Andrew, and beloved red poodle, Mickey.

“I have frequent bouts of pneumonia and infection,” Karen said, attributing the breathing difficulty to a lung abscess. “My go-to is to take medication and usually, within days, I would feel better. But in February, I kept getting worse and worse.”

Karen pushed her oxygen levels higher and higher. Nothing helped, and she wasn’t sleeping.

“I was exhausted all the time,” she said. “I never wanted to do anything.”

UF Health physician James Cury, MD, who specializes in pulmonary and critical care medicine, knows Karen symptoms better than anyone. He’s been with her through every stage of her disease. He ordered a CT scan, which revealed wet lung. Also known as pulmonary edema, it feels like trying to breathe while drowning. He needed to figure out what was causing it.

“I was just expecting bad lungs, and I thought, oh my goodness,” Zenni said after reviewing an echocardiogram. “The valve was blown. It was pulmonary edema from the blown mitral valve.”

Zenni pointed at the two mitral valve leaflets on his computer monitor. On the video, the right strip of connective tissue pumped up and down with purpose. A structured, systematic movement.

Zenni pointed to the leaflet on the left while explaining it should be moving in tandem with the other to create a synchronized swinging door effect, ensuring blood flows in one direction. Instead, the tissue flailed in wild confusion. No rhyme or reason to the rhythm. Blood exploded past the open gap each time the two sides didn’t connect, filling Karen’s lungs with fluid.

“There are these strings that keep the leaflets moving in place,” Zenni said. Her tendinous chords were broken off on one side, creating a loose hinge effect and allowing the uncontrolled leaflet to flap recklessly.

The interventional cardiologist recommended Karen get in right away to see Soffer, who specializes in structural heart interventions.

Soffer described the MitraClip procedure, a minimally invasive alternative to opening the chest and stopping the heart. Instead, under a much lower dose of anesthesia, doctors guide a catheter through a vein in the leg to the mitral valve and, in Karen’s case, attach the rogue posterior leaflet to the stable anterior leaflet, so they can pump in tandem.

Three months prior, Karen listened to Soffer’s MitraClip suggestion. Overwhelmed by the news, she went home to think. However, at that point in February, fear of the unknown was winning. All that could go wrong weighed on her brain as heavily as an anvil on her chest.

The lung disease scared Karen. She didn’t want to end up on a ventilator. In addition, she feared if anything went wrong and chest compressions were required, “every bone in my body would break from osteoporosis.”

As May approached, the risk-versus-reward gap got a lot smaller.

“I guess I got to the point where there was really no decision to be made,” Karen said. “It was either live or not live. I had to do it for my granddaughter and for any future grandchildren I might have.”

She scheduled an appointment with Soffer, but her body betrayed her before she got ready to leave that afternoon. Holding her chest, through gasps of air, she pushed out the words, “I don’t think I’m going to make it.” Panicking at her feet, a graying red Poodle howled uncontrollably.

“Mickey made sounds I’ve never heard from him. He sensed I was in bad shape.”

Fearing an ambulance would take her to another hospital, her husband, who is an OB/GYN at UF Health Jacksonville, drove her straight to the main campus emergency room.

“We gave her medication to dry out her lungs,” Soffer recalled. “Six days later, on May 21, we operated.” It was not a completely pre-planned procedure.

“I guess I got to the point where there was really no decision to be made. It was either live or not live." said Karen Kaunitz about the MitraClip procedure.

Putting her under became the first in a series of sensitive processes. The anesthesiologist worked carefully to make sure Karen was unable to feel anything, but not too sedated for fear of respirator removal complications. Next, Soffer needed transesophageal echocardiography to get detailed internal pictures of her heart valve. Karen’s first echocardiogram, an external view, revealed a 7-millimeter gap between leaflets. Anything wider than 10 millimeters would stop the process.

“Usually you do this as an outpatient first,” Soffer said. “But she was too sick. We decided if she was a candidate, we proceed. If not, we abort.”

Karen beat the race against time. Barely. She was right at 10 millimeters.

Soffer readied the MitraClip to delicately drop down just as the two leaflets touched the device, gripping them on either side at the exact moment to clip it.

With her posterior and anterior leaflets now safely and effectively connected, Karen wasn’t out of the woods yet. Soffer knew the hole he made going in to install the medical device would not heal on its own.

“Years of her heart working overtime to push blood to bad lungs caused severe pulmonary hypertension,” Soffer said, pointing to a screen and circling the left side of her heart. “The pressure on the right side was more than three times what it should be.”

To ensure the blood would not flow through the hole from right to left under this pressure without passing through her lungs, causing her to turn blue, Soffer installed a seal that resembles a double umbrella in the space.

“I wanted to share my story so others will know not to be scared,” Karen said. “If I would have known how different my life was going to be, I would have undergone this procedure a long time ago.”

Looking to the Future

Soffer’s precision proved paramount to Karen’s recovery. She was only on the ventilator a few hours. Her lungs lit up immediately. She was discharged two days later.

“When I woke up, I already felt better,” she said, referencing the disappearance of the crushing pressure on her chest. “Now we go out to dinner and movies. I’ve even gone to the beach with Andy. I don’t remember the last time I did that.”

With a smile, Karen thinks back to the obituary she wrote for herself. She says she likely won’t need it for quite a while.

“I wanted to share my story so others will know not to be scared,” she said. “If I would have known how different my life was going to be, I would have undergone this procedure a long time ago.” Tracy Collins was born in Bismarck, North Dakota and raised in Great Falls, Montana. After four years in the U.S. Navy as an award-winning broadcast journalist, she graduated from the University of North Florida with a B.S. in Communications.

As media personality Tracy Dot Com, she is known for her entertainment insight in Jacksonville, Florida. She appears weekly on WJXT/TV-4 The Local Station and CW17, writes a column for The Florida Times-Union and BUZZ Magazine and was voted Best Righteous Crusader two years in a row by Folio Weekly readers for her work in the community.

She is currently working on her first full-length book and speaking around the country promoting alcohol awareness and education.

Giving Back and Paying it Forward 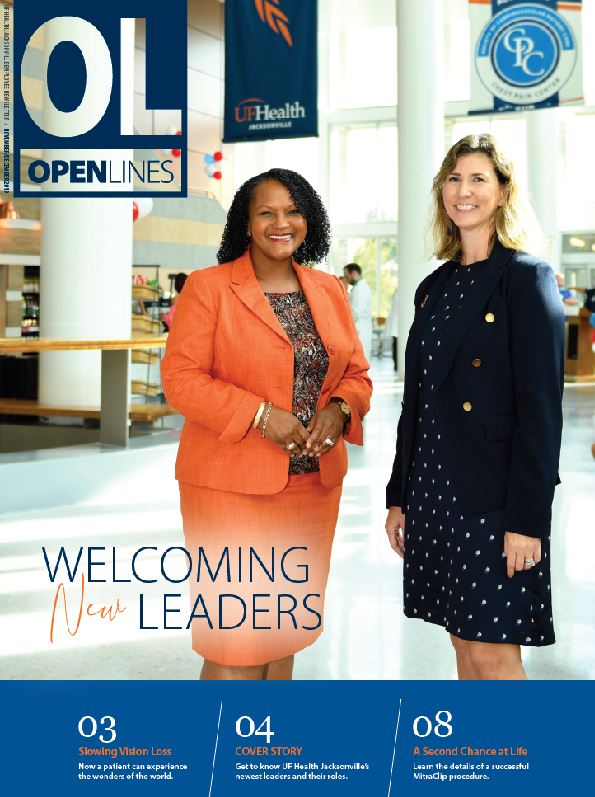