Olivia Mia Elizabeth Bartley curiously took a bite of sugary cake and frosting at her first birthday party, oblivious to the palpable emotions of the adults surrounding her high chair. Just one year earlier, during a dramatic 34-week pregnancy, it was uncertain that such a celebration would ever take place.

Olivia’s mother, La’Trece Bartley, did not experience complications during her first two pregnancies and delivered both babies via cesarean section. During an early ultrasound with her third pregnancy, the baby appeared to be low in her uterus. She was referred to a local obstetrics practice for women with high-risk pregnancies and was diagnosed with placenta accreta, meaning the uterus was embedded in the cesarean scar. The rare condition occurs only in 0.3 percent of women with one previous C-section delivery and increases to 6 percent for women with five or more past C-section deliveries.

La’Trece was told her life was at risk due to the possibility of uterine rupture, which would cause fast and substantial blood loss. Her providers at the time told her she would likely carry the baby for only 19 weeks and the chances of the baby surviving were low. They recommended immediate termination of the pregnancy.

La’Trece was concerned about such a hasty decision and felt strongly that she should continue carrying the child. She decided to seek a second opinion. During the first two months of her pregnancy, she saw four specialists, all of whom told her multiple times she should terminate the pregnancy. She describes this time as the most contentious and difficult in her life.

La’Trece stayed strong. She didn’t feel aborting the pregnancy was the right decision for her, and she would not back down. Her faith and personal convictions carried her, providing strength to have her voice heard. La’Trece’s husband, Javier, never missed an appointment and her mother joined them to offer support.

While pregnant with Olivia, La’Trece Bartley was diagnosed with placenta accreta, meaning her uterus was embedded in her existing cesarean scar.

La’Trece was told her records would be transferred at 23 weeks to a local hospital equipped to handle her high-risk delivery via C-section. Her family was encouraged to donate as much blood as possible, as transfusions during the surgery were highly likely. The delivery was planned for 25 weeks. At 24 weeks, no specifics had been discussed, and La’Trece started to feel concerned.

“Something didn’t feel right,” La’Trece said. “No one was saying anything to me anymore about the transfer or delivery.”

When she questioned a nurse, she was told that the team of surgeons were meeting to decide whether to take her case. Feeling angry and confused that she was not included in the decision-making, La’Trece turned to prayer. She felt she needed to advocate for herself and the baby, and for her, that meant leaving the practice.

She was five months pregnant, and her life and the life of her baby were on the line. She wasn’t sure where to turn and felt she needed a miracle. She called a friend who works as a labor and delivery nurse. Knowing her condition, the friend suggested she meet with Erin Burnett, MD, an OB-GYN who specializes in maternal and fetal medicine at UF Health Jacksonville.

Then La’Trece got a text from her supervisor at work. She gave La’Trece the name of a physician who might have been able to help. La’Trece got chills. The names matched. She agreed to meet with Burnett.

The nurse friend contacted Burnett about arranging a meeting. She was on vacation but came right in to meet with La’Trece and Javier, understanding how critical timing was for this condition.

“The fact that Dr. Burnett would see me on such short notice and while she was on vacation told me who she was as a person,” La’Trece said.

La’Trece describes Burnett as caring, honest and gentle, but with a strength and knowledge that immediately brought the couple peace.

“She has a big heart and listened to my whole story,” La’Trece said. “She spoke with my initial OB-GYN to get all the history and receive my medical records.”

Burnett made it very clear that she could make no promises, but that she would give it her all by forming a team of specialists necessary to give La’Trece and the baby the best chance at survival. The couple knew the situation was very serious, but for the first time in five months, they felt hope.

Timing was the deciding factor. La’Trece would deliver at 34 weeks’ gestation. Burnett assembled the team and gave La’Trece the day and time to arrive at the hospital. It was a packed house in the operating room, with participating providers and also medical students there to observe and learn during the six hours it took to finish all the procedures. The group prayed together before the surgery began, calming La’Trece and Javier and taking a mindfulness moment to recognize how unified they all needed to be to best serve mother and baby.

“This was such an exciting yet scary day for the family, but one they had been hoping and praying would come,” Burnett said.

First up was Anjum Anwar, MD, an obstetric anesthesia fellow. She explained her role to La’Trece and told her she would stay with her the whole time to keep her dosing level accurate to sustain many hours of surgery.

Burnett performed the C-section, delivering Olivia on Oct. 26, 2017, at 8:49 a.m., with Stephanie Tootle, MD, an OB-GYN resident. The neonatal team took charge of Olivia, addressing a few health issues during her weeklong stay in the NICU.

“There are a plethora of specialists at UF Health, which made it easy to assemble a team,” Burnett said.

The formed mass where the uterus and placenta joined at the scar had grown too large to be an exit point for the baby. Instead of following a horizontal, or bikini-cut, style, Burnett made a vertical skin surgical incision to stay above the level of the placenta accreta. Without using this technique, the placental mass could have led to excessive blood loss, causing La’Trece to bleed out very quickly.

“Dr. Burnett saved my life,” La’Trece said. “I got so many nos from doctors during my pregnancy, and only one that said ‘I’ll stand with you.’”

Because placenta accreta involves the invasion of the uterus by the placenta, a full hysterectomy was a necessary part of the delivery. The hysterectomy alone took nearly two hours, with Karina Hew, MD, an OB-GYN who specializes in gynecologic oncology, leading the surgical group, which also included Isaac Delke, MD, an OB-GYN who specializes in maternal and fetal medicine.

Removing the uterus required removal of a portion of La’Trece’s bladder as well. Joseph Costa, DO, a urologist who specializes in neurourology and reconstructive surgery, performed a complex reconstruction of La’Trece’s bladder. The nature of the complicated pregnancy and delivery created the potential to have lasting negative effects for her bladder, but Costa was pleased with the results.

“It was a big win at the end of the day — an awesome job by Dr. Burnett’s team, with a healthy mother and a healthy baby,” Costa said. “La’Trece is the kind of person with a wonderful, positive attitude toward recovery who you know is going to recover well.”

La’Trece recounts the many providers who made sure she understood each procedure and answered any questions before and after the surgery.

“I don’t think there was a department at the hospital that didn’t treat me in some way that day,” said La’Trece. “I can’t thank everyone enough.”

Burnett describes the whole day as one she will never forget and feels it was a great honor to be a part of Olivia’s birth under these rare circumstances.

“What an honor to have such a great team behind me and to be able to help this family meet their daughter,” Burnett said.

La’Trece willingly signed consent forms to allow her placenta and uterus to be donated to research to help future women facing the same condition.

“At UF Health, I was never made to feel my decision to continue the pregnancy was wrong — that meant a great deal to me,” La’Trece said. “I don’t want any other mothers to go through what I did to continue a pregnancy.”

As La’Trece Bartley snapped photos of her healthy daughter eating cake with balloons in the background, images of her delivery day flashed through her mind, filling her with gratitude to have this beautiful child in her life.

Javier and La’Trece Bartley are all smiles alongside Erin Burnett, MD, who delivered Olivia. 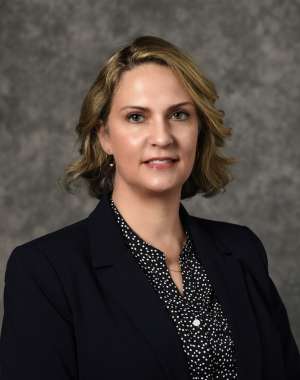 Sarah Miller is the marketing manager at UF Health Jacksonville. Her team is responsible for marketing efforts for the organization’s 34 primary care locations, as well as all specialty services, such as imaging, neuroscience institute, cardiovascular center, orthopaedics, urology, the cancer program, and the women’s services areas of OB/GYN and labor and delivery. 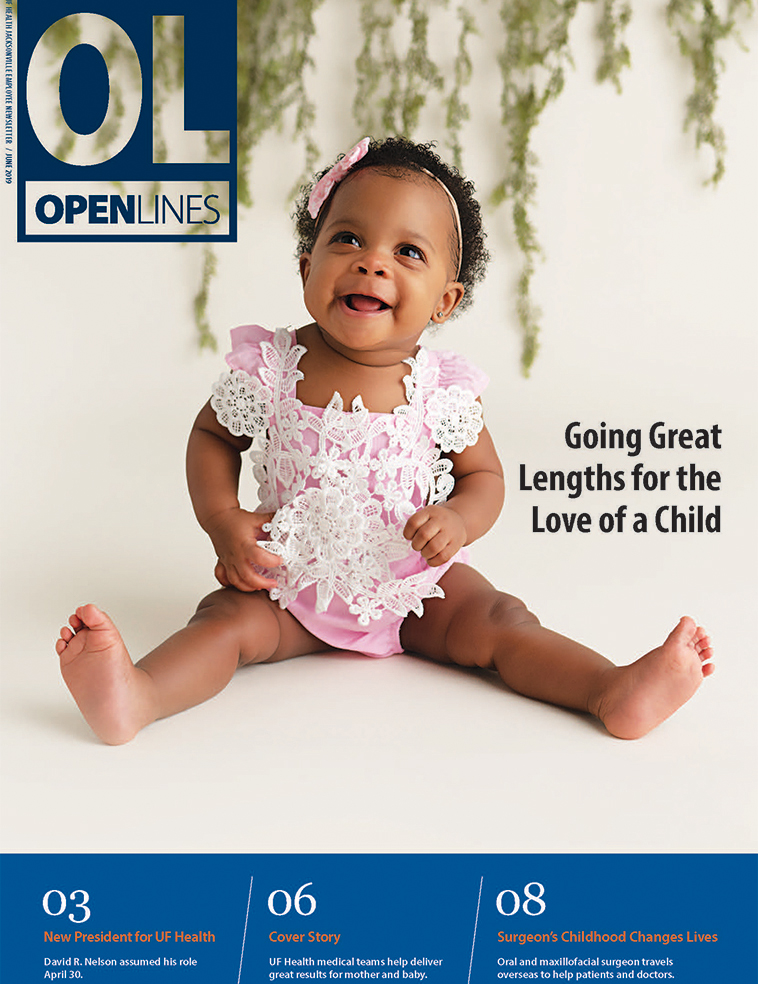