Pam Hemmen sent her son, Chris, to his part-time job coaching youth sports with the family’s signature goodbye on the morning of July 23, 2017.

“Don’t eat Tide Pods,” she said, with a winking acknowledgement that the reminder was unnecessary.

Pam and her husband of 23 years, Geoff, are raising their three kids to be smart, confident young people. Nolan excels as a ninth-grader on Bartram Trail High School’s junior varsity cross country team. Sarah is in her second year at the Wilkes Honors College of Florida Atlantic University. Chris, the middle child, is a sports fan who is naturally drawn to math and science. He studies architectural drafting in Bartram Trail’s design academy.

But that piece of advice was nearly the last thing Chris’ mother ever said to him. As he walked out the door, he flashed his infectious smile and gave a “thumbs-up,” unaware of how his life was about to change.

Chris had been coaching at a nearby park, but a scheduling change would later require a 45-minute commute to the Jacksonville Ice and Sportsplex just south of downtown. Financially, it didn’t make a lot of sense for $10 an hour. Besides, all that driving for a 16-year-old made Pam nervous. He was planning to resign that day.

But Chris never made it to work.

While he traveled north on Bartram Park Boulevard — being careful to avoid the high speeds of Interstate 95 — water was pooling on the road from what the Hemmens can only suspect was a broken sprinkler head. When Chris’ Jeep Liberty hit the slick, it hydroplaned and began to roll toward a row of neatly planted oak trees outside a new townhome development. The Jeep’s roof, and Chris’ head, crashed into a tree.

Back at home, Pam was outside pressure-washing the back patio. She came in for a glass of water and saw several missed calls from an unfamiliar number. Then Geoff called.

“All I heard was Chris… accident… severe brain injury,” she said.

The phone dropped to the floor.

First responders took Chris to the nearest emergency room, where doctors worked to stabilize him. Pam rushed out the door, leaving Sarah home with Nolan.

By the time Pam arrived at the hospital, Chris was already set to be transferred to the region’s only Level I adult and pediatric trauma center, UF Health TraumaOne.

Pam accompanied her son in the ambulance. When they arrived, Chris was whisked away and Pam was soon meeting Gazanfar Rahmathulla, MD, medical director of neurosurgery trauma at UF Health Jacksonville.

Incredibly, Pam learned, Chris had no broken bones and required no surgery. But the news wasn’t exactly good.

The brain’s neurons are connected by tiny axons, like a vast array of microchips in a computer. This circuit is the network through which information travels in the brain. When the roof of Chris’ Jeep caved in, the force caused a diffuse axonal injury.

“The acceleration and deceleration of the brain within the cranial vault stretched these axons out and caused microscopic disruptions,” Rahmathulla said. “So the electrical signals that normally jump across are not jumping across. All the signals are stopped or disrupted.”

Chris was in a coma.

THUMBS UP FOR CHRIS

“Nobody gets up in the morning and says they’re going to fall off the roof or get in a severe crash,” said Andrew Kerwin, MD, division chief of acute care surgery at UF Health Jacksonville. “But it happens to people in everyday life. And when it happens, it’s scary.”

To work through that fear, Pam created a Facebook group as an outlet for her thoughts and feelings. The group, #ThumbsUp4Chris, became a place where family and friends could express their support.

Within five days, Chris received more than 200 messages of encouragement. Through the group, Nolan and Sarah organized a prayer circle at a neighborhood park. More than 300 people showed up.

Chris spent 21 days in the pediatric ICU at UF Health Jacksonville, under the care of a dedicated team of trauma care providers that is unmatched in Northeast Florida or Southeast Georgia.

With a diffuse axonal injury, the goal of hospital care is to quickly get the patient well enough for rehabilitation. In rehab, the aim is work hard each day to regain a relatively normal life. There are no days off. It was in this environment that Chris began to ask questions.

The last thing he remembered was going to see a movie with friends the night before his accident. Now he was relearning how to brush his teeth. One morning, Chris looked up and asked what happened.

“I was lying in bed and I started crying,” Chris said. “I might not be able to walk again.”

His family assured him, “You’ll be walking in the next week.”

Sure enough, he was walking with assistance six days later.

“Nobody gets up in the morning and says they’re going to fall off the roof or get in a severe crash. But it happens to people in everyday life. And when it happens, it’s scary.”
Andrew Kerwin, MD
Division Chief of Acute Care Surgery, UF Health Jacksonville

For every step along Chris’ journey to this point, there was a range of possible outcomes. Pam had been told to prepare for lifelong, in-home care. But there was also the slim possibility Chris could walk out of this, back to his normal self.

“It is very difficult to predict,” Rahmathulla explained. “We don’t want to make the patient’s family lose hope, but neither do we want to provide them with a false sense of an outcome which is unexpected.”

Chris’ recovery was certainly unexpected. Not wanting to interrupt his incredible progress in rehab, UF Health providers made every effort to streamline his follow-up visits.

“Complex trauma patients often have to come back and see many specialists and also have to get imaging or further testing,” said trauma surgeon Brian Yorkgitis, DO. “It really takes away from their therapy and so we really try hard to focus on getting them back into rehab.”

Yorkgitis arranged for Chris to come back to the hospital for multiple appointments in one visit. Chris needed to have his feeding tube removed — one step closer to getting that sweet, smoky barbecue. He also needed a repeat CT scan and to see several specialists.

“This doctor from UF Health is calling me on my cell phone because he heard Chris needed to have certain things done that we couldn’t do because we couldn’t take away from his therapy,” Pam said. “He said ‘Can you come in today? We can get the feeding tube out, do the CT scan, and we can do the neuro analysis.’”

Yorkgitis met Chris and Pam in the parking lot, navigated them through the hospital for several appointments, removed the feeding tube right in the radiology office and walked them back out to their car. The visit took a half hour.

“It was absolutely amazing to have a doctor do that,” Pam said. “Amazing.”

THUMBS UP FROM CHRIS

Soon it would be Chris’ turn to amaze his mom, as well as his doctors. On Sept. 15, just 54 days after the accident, Chris walked out of Brooks Rehabilitation with a double thumbs-up and that same smile.

He completed his first semester of the 11th grade from home and returned to school the following January.

Chris Hemmen takes an enthusiastic selfie with many of his UF Health providers in the background.

This May, Chris will graduate on time. He has been accepted to the University of North Florida, where he can pursue a college degree while staying close to home.

Unless you were one of Chris’ providers, a family member, friend, classmate or any one of the nearly 1,400 members of the #ThumbsUp4Chris Facebook group, you would never know he spent part of 2017 in a coma. At the site of the accident, the St. Augustine grass has spread its thatch, erasing tire tracks. The hedges have matured outside the suburban neighborhood, but peer through them and you can spy an inscription carved into one of those neatly planted oaks.

Chris Hemmen was the patient honoree at the 2019 “A Night for Heroes” gala, an annual event that benefits UF Health TraumaOne, the region’s only adult and pediatric Level I trauma center.

Thank you to all of the event sponsors! 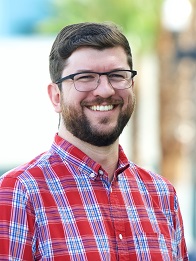 Letter from the CEO, March/April 2019